DATE                                   October & November on Bank House Fly Fishery
REPORT AUTHOR           Ben
NOTABLE CATCH:          17 trout for David Harrison, 15 trout for Dave Ferguson
HEAVIEST BAG:              19lbs 9oz (4 trout) Norman Chapman (Liverpool)
BEST RAINBOW:            17lbs for Scott Pozzi
BEST BROWN:                 5lbs for Mr J Metcalfe (Preston) and for Mr S Rhodes (Leyland)
BEST BLUE:                      5lbs 4oz Norman Chapman (Liverpool)
ROD AV:                             2.8 fish per man.
Sport: Bank House is currently fishing well. Norman Chapman took seven trout on Sunday to black fritz and his first four tipped the scales to 19lbs 9oz. Norman’s Bag included a cracking 11lb 2oz rainbow (picture to follow) and most of his fish came from Witches Island or The Swim. Scott Pozzi was also amongst the trout on Saturday with ten rainbows and browns the best of which was a colossal rainbow of 17lbs that was released to fight another day. (pictured below). We have had more doubles caught recently with Mr A wright taking an 11lb 8oz rainbow on a clifton and Paul W caught a 12lb rainbow (pictured below). Amazingly this was Paul’s first ever trout on fly!
The stamp of trout coming out of the fishery at the moment is brilliant. There have been a lot of three to six pounders about and the average weight of each fish caught over the last month was 2lbs 11oz
The best tactics and flies have been various gold headed lures fished on floating lines with the best colours being olive or black and occasionally orange. Buzzers have been responsible for some great bags of trout. When the water is nice a clear small black patterns have been best but if there is a peaty tinge in the water white patterns have been most productive. However, on the right days dries fished on top or little wets stripped back just sub surface have out fished all other methods. The conditions need to be right: overcast or flat calm with the odd fish showing. But note, the fishery doesn’t need to covered with rising trout for this method to work well.
Hope to see you on the water. Ben and Charlotte. 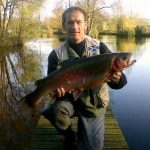 Scott Pozzi caught and returned this cracking 17lb rainbow on Saturday November 12th. It fell to an orange tadpole in the Lodge Pool. 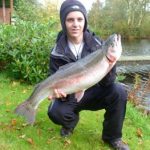