On Sunday we held a heat of Iain Barr’s World Bank Championship on Bank House Fly Fishery. We only had 7 anglers fishing but boy did it fish well! The 7 anglers caught 77 trout between them up to 12lbs giving an 11 fish rod average!
The top rod was Ryan Mathews with 15 trout caught over 9 of the 10 pegs. This gave him a whopping score of 24 points, which is a record for Bank House. Ryan switched between three methods over the course of the match. From twitching back an apps worm on a floater, to small natural olive and black buzzers to tinnies fished under the bung. Good angling Ryan. Ryan’s best fish weighed 9lbs 8oz.
In 2nd place was Andy Grabham with 12 trout caught over 8 pegs giving him a total tally of 20 points. Andy caught all his fish on an olive apps twitched back on a floating line. In
In 3rd place was Alan Wilkinson with 13 trout from 5 pegs, which gave him a score of 18 points. Alan caught on a pink bug fished under a bung.
Three other anglers scored between 15 & 17 points, namely Andy Cooper, Peter Mathews and Warren Langridge so it was a close run affair with competitors left considering those that got away. Andy Cooper also returned a rainbow at 12lbs+ and Nigel Conlan weighed in a fish of over 7lbs. (See pics below) Bank House is fishing really well at the moment, and if you are on the water in the evening there are some lovely resident rainbows and brown to be had on small black dries. Tight Lines Ben 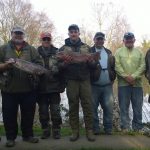 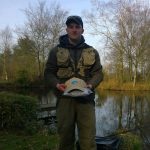